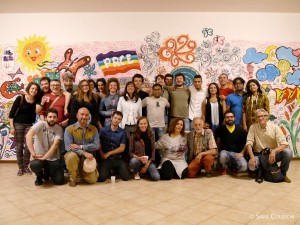 We trace a path of coltures and traditiones. A path of piece, of nomadism and love for one’s roots, wich from North the Africa, rises to Turkey, Greece, the Balkans, Eastern Europe and finally reaches our country, along the coast bathed by Mediterranean that unites and alienates people, a path that starts from the ancient stones that recognized the three great religions, from the land that was crossed by the unifyng tribe of Abraham and that traces the path of the many attempts of conquest by the West. Today a path of new migrations.
Let’s try to think of the music that runs through the hearts of the people of those lands. Let’s try to understand them. We will discover that roots are not as far apart as they are believed. Culture and traditions have much in common such as: flavors, sounds, rhythms.
Let’s try to think of the dramatic need to stop the war spiral and to find a just peace solution and a coexistence based on the recognition of everyone´s rights to existence, to creativity, to life. Culture and music mean plurality, confontation and mixture.

These are the inspiring principles of the project that led to the establishment of the Orchestra Multietnica di Arezzo (Arezzo Multiethnic Ochestra).

The Orchestra Multietnica di Arezzo, was born in 2007 from a training course, open to the participacion of Italian and foreign musicians and aimed at the knowledge and deepening of the basic structures of the traditional music of the Mediterranean areas, for cross them with the Italian and European Tradition and prepare a reportoire based on contamination.
The activity of OMA has so far developed, giving rise to a profissional production project, whilw maintaining the characteristics of the permanent laboratory, still open to new entries, especially with regard to foreign musicians.
The permanet laboratory, as well as the many other activities aimed at the world of the school (production laboratories in the Liceo Musicale and concerts lessons at primary and secondary schools of the first and second degree) wich the musicians of the OMA realize during the year, they make a strong contribution to the creation of a cohesive local multicultural, society in wich cultural diversity is considered a value and mutual enrichment.
The historical nucleus of the Orchestra Multietnica di Arezzo proposes a repertoire that ranges from the Arab tradition to the Jewish tradicion, from the Mediterranean to Eastern Europe, To Bangladesh, offering the public a veritable feast of sounds and colors masterfully coordinated by Enrico Fink, a great expert on traditional Jewish music and word music in general.

In May 2009 the first CD of the OMA was released, the Animaneticcia (Maxresearch/Officine della Cultura) distributed by Materali Sonori.
Also in 2009, a collaboration with Stefano “Cisco” Bellotti produced a new repertoire and series of concerts  by the Orchestra togheter with the former voice of the “Modena City Ramblers”, from wich the tracks were inserted into the CDs “Cisco dal vivi volume 1 and volume 2”

In August 2010, the OMA meets the great voice of Raiz, an esperimenter, already leader of Almamegretta. An extraordinary and countercurrent protagonist in Italian music of the last Twenty years, has recently discoverd the millenary charm of the jewish, klezmer and Yiddish. Hence the encounter with Enrico Fink director of the Orchestra and an important scholar of his own cultutal roots.
In 2010, MEI nad Amnesty International awarded the OMA with the Border Sounds award for the live activity.

In the summer of 2011, the collaboration with MONI OVADIA arrives, the ochestra is confronted with its thickness and projected itself towards new musical adventures. Ovadia: author, musician, singer, actor, great connoisseur and protagonist of Jewish culture from the Mediterranean to Eastern Europe, but also  free spirit of our time, an interpreter of today’s Italy, of its cultural wealth and its miseries and contradictions.
Also in 2011, twelve OMA musicians (directed By Enrico Fink), constitute the musical part of the show Credoinunsolodio, with Amanda Sandrelli. The show is written by Stefano Massini for the Multiethnic Orchestra. The project defined by the same author “theatrical-musical event for actress and orchestra”, is repeated during the 2011/12, 2012/13 and 2013/14 seasons.

In August 2012, the OMA produces a new concert arranging some of the most beautiful songs by Ivan Graziani that are sung with OMA by Fillipo Graziani, son of the singer who died in 1997.

The 2013 is the year of second  output OMA CD, Portosantagostino (Officine della Cultura/ Associated Sound Materials) distributed by Materiali Sonori
Also in 2013, the OMA meets the Bandabardo. Erriquez and Finaz, the two undisputed leaders of Bandabordo, are on stage togheter with the Orchestra Multietnica – exceptional events of the Music Festival and of The Orientoccidente Festival – to sing and play some songs chosen among the most representative of the Banda’s extensive repertoire, arranged for the Orchestra by Enrico Fink.

New precious collaboration is that of summer of 2014 with Shel Shapiro, the leading voice of a decade of Italian music (The Rockes) and now a versatile artist and producer. The production returns to the stage in the years 2016 and 2017 with a tour in some historical theaters of the Tuscany region by Foundation of entertainment of Tuscany and an event meeting in the Prison District of Prato.

The year 2015 is for OMA the year of the return to study and deepening giving life to a laboratory with Frank London, trumpeter and composer of New York, leader of the group Klezmatics. The Klezmer soul worshop aimed at a concert on the big stage of the Cortona Mix Festival, one of the most important festivals of the Val di Chiana Tuscany.

In 2017, the OMA celebrates its 10 years of activity by inaugurating the Music Festival in the company of one of the main voices of the Italian Indie music scene, an ironic but never cynical narrator of comtemporary disagreements: Dario Brunori.
Still in 2017, after the experience with Credoinunsolodio, the Arezzo Multiethnic Orchestra returns to the theater with a special project in the company of Ottavia Piccolo on a text by Stefano Massini: Occident Express (haifa was born to stand still) ( co-production Teatro Stabile dell’ Umbria and Officine della Cultura)

A special year, 2018, wich, wilhe one the hand completes and confirm the project of narrating the disagreements of the comtemporany with Dario Brunori- scheduled events within the billboards of the Teatro Verdi of Monte San Savino (AR) and of the Auditorium Le Fornaci oir Terranuova Braccioline (AR), participation in the transmission BrunoriSa on Rai3 (de 13’15”), special project “Culture against fear” in collaboraction with CoopCulture between Agrigento and Palermo, on the other begins research path on popular music with an exceptional trio: Ginevra Di Marco, Francesco Magnelli and Andrea Salvadori. The concert debuted with a full house on the XXIV edition of the Music Festival. Cherry on top of the cake in participation in the final evening of the XXIV edition of the Ciampi Prize, at the Goldini Theater in Livorno, togheter with Paolo Benvegnu, Dente and Isabella Ragonese, as well Ginevra di Marco.